Why have Apple and Tesla split their stocks? From Charlie Hancock 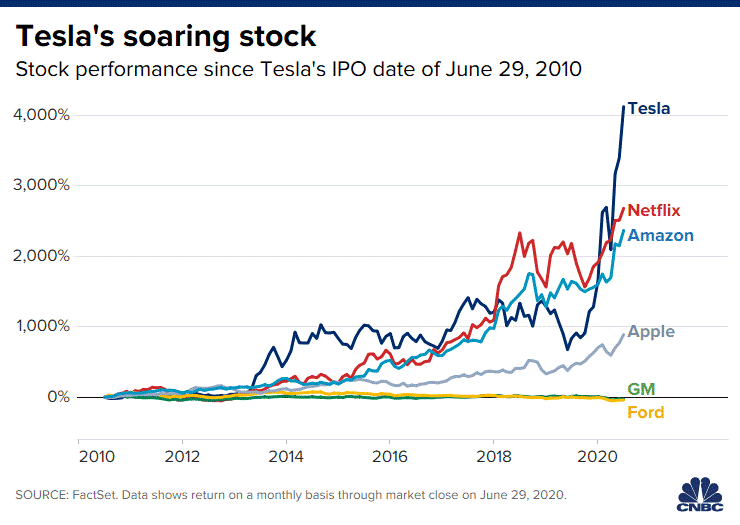 Reports regarding Apple and Tesla have been plentiful in the business press during recent months and the implementation of stock splits last week resulted in both companies making the headlines once again.

As with many other technology companies, Apple and Tesla have seen their share prices rally significantly since the market sell off in March 2020. Despite losing some ground this week, the stocks have climbed 61% and 373% respectively in the year to date. With a market cap of $2 trillion, Apple is now the world’s largest company, whilst Tesla is valued at $380 billion.

Some investors believe that technology stocks (and most of all Tesla) are significantly over-valued relative to the rest of the market, but nevertheless this doesn’t seem to have daunted some speculators who have continued to buy.

Prior to the share split last week, one Apple share cost just under $500, with Tesla stock costing just over $2,200 each. Apple carried out a four-for-one split, bringing the share price closer to $125, whilst Tesla conducted a five-for-one split to see their shares trade at closer to $440. Whilst this means that existing shareholders will now hold a greater quantity of shares, the split itself has no impact on the value of their holdings, with four apple shares worth the same as one share prior to the split.

Traditionally, listed companies would carry out share splits in order to make their shares more affordable for retail investors. The theory behind this suggests that a ‘cheaper’ share price will be more attractive to retail investors, with share prices such as the $2,200 which Tesla recently reached being a deterrent for investors with relatively small amounts to invest. Historically, companies with share prices such as this would gather more support from institutional investors, who have relatively large amounts of capital to invest.

In today’s world, this argument holds little weight, as it’s possible for retail investors to purchase fractional holdings via most online platforms. For example, an investor with $100 would’ve been able to acquire roughly 1/5th of an Apple share prior to the split taking place. Only 3 companies in the S&P 500 index have split their stocks so far this year, compared to 102 in 1997, suggesting that most companies now feel accessibility for smaller investors is not an issue.

A more probable explanation as to why established companies like Apple and Tesla would opt to carry out a share split could be the media interest which it generates. A flurry of headlines can spur a rise or fall in a company’s share price and it appears that the reports relating to Apple and Tesla last week had a positive impact. In the week prior to the splits taking place, Apple’s share price rose by 2.5% and Tesla saw a 23.7% rise.

Over the last couple of days, both stocks have been in the headlines again after seeing their share prices decline. It seems that some investors have decided to take profits from the recent rally, however, despite some relatively sharp declines, both shares have only given up gains from the last fortnight.